One two three four! Do you think you have rhythm? These lemurs have more!

No, this is not a new group climbing the UK charts. In fact, this is a species of lemur known for its song and its talents sound more like the human voice than you might think!

These critically endangered primates live in Madagascar, and scientists have found that they sing at rates previously thought to be possible only in humans and some birds. 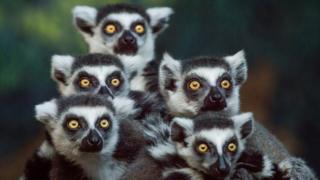 Lemurs are social animals and can live in communities of 10 to 25 members!

After analyzing hundreds of songs of lemurs, scientists at the University of Turin in Italy discovered that they harmonized with each other, in duets and sometimes in choirs of more than two animals.

They also sing to find lost family members, mark parts of the forest as their territory, and even engage in “voice battles” with each other!

Although their songs do not appear to be the number one material, scientists have said that the length of the notes and the patterns in which they are sung share many similarities with human music.

For example, indris sing certain notes longer than others during their songs, in patterns very similar to the “stomp, stomp, claps” of Queen’s famous track “We Will Rock You”.

The study’s lead researcher, Chiara De Gregorio, said the discovery “pays off for all the days spent shivering in the rain, waiting for the animals to sing.”